The Autobiography of Kathryn Janeway

The Autobiography of Kathryn Janeway 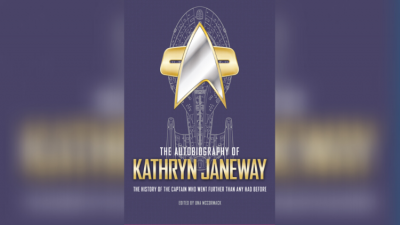 Just in time for the 25th anniversary of the premiere of Star Trek: Voyager, publisher Titan Books has announced the release of The Autobiography of Kathryn Janeway, available next summer.
A piece from StarTrek.com reports that Titan Books made the announcement at Destination Star Trek over the weekend.

In the book, according to StarTrek.com, “We get to hear the story of one of Starfleet’s greatest captain in her own words.
We’ll hear her side of the story about how she and her crew traveled further than any human ever had before, stranded decades from home while encountering new worlds and species.
Explore how she brought together Starfleet and the Maquis as part of her crew, forged new alliances with species across the galaxy and overcame one of Starfleet’s greatest threats – the Borg – on their own remote and hostile territory. And, we’ll get Janeway’s personal take on key characters such as Seven of Nine, her trusted friend Tuvok, new arrivals like Neelix and her second-in-command, Chakotay.”